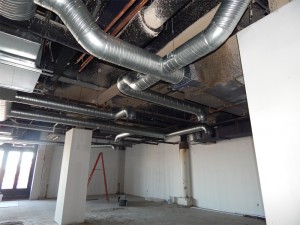 Ventilation is the process of changing or replacing air in any space to control temperature or remove any combination of moisture, odors, smoke, heat, dust, airborne bacteria, or carbon dioxide, and to replenish oxygen. Ventilation includes both the exchange of air with the outside as well as circulation of air within the building. It is one of the most important factors for maintaining acceptable indoor air quality in buildings. Methods for ventilating a building may be divided into mechanical/forced and natural types. Mechanical or forced ventilation

“Mechanical” or “forced” ventilation is provided by an air handler and used to control indoor air quality. Excess humidity, odors, and contaminants can often be controlled via dilution or replacement with outside air. However, in humid climates much energy is required to remove excess moisture from ventilation air.

Kitchens and bathrooms typically have mechanical exhausts to control odors and sometimes humidity. Factors in the design of such systems include the flow rate (which is a function of the fan speed and exhaust vent size) and noise level. Direct drive fans are available for many applications, and can reduce maintenance needs.

Ceiling fans and table/floor fans circulate air within a room for the purpose of reducing the perceived temperature by increasing evaporation of perspiration on the skin of the occupants. Because hot air rises, ceiling fans may be used to keep a room warmer in the winter by circulating the warm stratified air from the ceiling to the floor.

Room pressure can be either positive or negative with respect to outside the room. Positive pressure occurs when there is more air being supplied than exhausted, and is common to reduce the infiltration of outside contaminants.